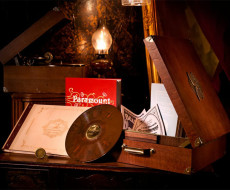 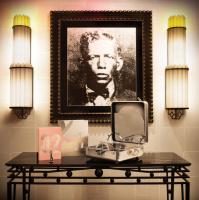 David Glasser and Anna Frick worked to restore and master a unique catalog of music — The Rise and Fall of Paramount Records 1917-1932, Volumes One and Two. Each volume holds 800 tracks. Volume One, covering the years 1917- 1927, was released in fall 2013 to great critical acclaim, and we collected some of the notable reviews here.

In fall 2014, Third Man Records and Revenant Records released Volume Two, for the intensely productive period from 1928 to 1932, when Paramount failed in the Depression. We’ve updated this blog post to include some of the Volume Two reviews.

Read Dave’s blog post about how the project came to be and the processes used to restore the music.

Third Man and Revenant introduced the first—quarter-sawn oak—”cabinet of wonder” through a video view of the box, discs, books, USB drive and ephemera. The streamlined Machine Age case housing the second volume is similarly intriguing, with laser-etched LPs and books of comparable scholarship and detail.

While not a review, we had to include a link to an interview on the Billy Reid website. Billy Reid is a chain of 11 boutiques in the US. For SXSW, it mounted an exhibit called Blueprint next to its Austin store, exploring the Paramount project and its esthetic, and posted an interview with the always-stylish Dean Blackwood on its blog

The most recent reviews are found at the top of this list.

NPR  – The two news stories linked here include a handful of audio clips from Volume Two:

‘The Rise and Fall of Paramount Records’ Remastering American Voices, In Mass Quantities

A Menagerie of Music Lives in a Box, Jack White Explores History of Paramount Records

Paramount Records: The Label Inadvertently Crucial To The Blues

Holding Music History In Your Hands: Why Archives Matter

Considering an historical project you’d like us to help restore?

Prospective Restoration Center clients are welcome to contact Ann Blonston in Boulder to discuss their project: 303-247-9035.