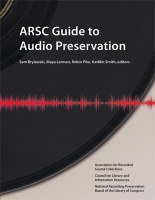 Report from ARSC — Everybody Has Something

Ann Blonston represented Airshow’s Restoration Center at the 2015 ARSC conference in Pittsburgh in late May. She describes the event as a entertaining mash-up of archive professionals and obsessive collectors.

“Quantifying the Need: A Survey of Existing Sound Recordings in Collections in the United States” is the title of the study and the presentation by researcher Rebecca Chandler. Its purpose was to describe the current backlog of analog audio recordings in institutional collections. The study was conducted by two vendors in the field, AV Preserve and the Northeast Document Conservation Center, and funded by the Andrew W. Mellon Foundation, which has made a large commitment to media preservation.

At the national level, the prospective loss of millions of unique audio recordings due to media degradation and playback obsolescence has gained a lot of attention. The result has been some new national funding initiatives (accompanied by discontinued federal funding initiatives at the same time) and a plethora of documents about media preservation – the why, the how and finally, how much.

Why – Answered by the Library of Congress

The LoC’s 2012 National Recording Preservation Plan  called attention to the prospective cultural losses and at-risk media and offered 32 short- and long-term recommendations involving both public and private sectors. An element of the federal effort is the LoC’s own National Audio Visual Conservation Center in Culpepper VA, a hands-on processor and repository of millions of media items.

How – Answered by ARSC

The methods of audio preservation are well established in the audio and archive fields, and are thoroughly documented by a new guidebook released at the conference. “The ARSC Guide to Audio Preservation”  was underwritten by the LoC and co-published with the Council on Library and Information Resources (CLIR), a national-level nonprofit organization.

The question of “how much” was last asked and answered in 2004, and the answer, though widely quoted, doesn’t reflect the growing focus of repositories on media collections.

254 Million is a Lot of Recordings!

Since this number will be widely quoted (and since it’s much larger than the 40 million figure from 2004), Chandler described the study’s methodology in some detail. The research had three steps: a review of existing collection surveys (which served as a benchmark for the project’s own surveys), a small-scale survey of representative types of institutions and a larger scale survey that generated self-selected responses by 200 institutions. The research tried to describe media holdings by type of institution and by media type, and then to qualify holdings as non-unique or as unique and thus “preservation worthy.”

That staggering figure of 250+ million is the researchers’ estimate of preservation worthy analog recordings in institutional hands that have not yet been digitized. Another 200 million were identified as non-unique (commercial mass media recordings, for example); another 50 million have been digitized.

The researchers did not count recordings in the hands of private collectors or performing arts venues, and knowing the makeup of ARSC, it’s obvious that the figure would swell if it included the private holdings of just ARSC individual members.

Who Holds the Collections?

The study grouped institutions as academic libraries/academic archives; non-profit broadcast organizations; state and big city historical societies; special libraries, to which they added the handful of public libraries caught up in the survey; and museums/archives. By far the largest holdings are in academic libraries and archives, which hold an average of over 80,000 recordings each, and museums and archives, which hold an average of just under 40,000 recordings each, as estimated by the study.

It helps to know media type (grooved, optical or magnetic) to determine the urgency of digital preservation and also to quantify the recordings that could be batch processed by high-volume digitization vendors, versus those that should be processed one at a time in a more specialized workflow. For example, oral history cassettes lend themselves to mass digitization, while open reel tapes, and particularly those of music, are typically digitized in a workflow that emphasizes real time playback and 100{78247d6b22ac27135341102d75ec43dc193986201927d8d8e39f5e476ed6f5be} monitoring. Certain optical formats are considered priority candidates for digital preservation because of the obsolescence and scarcity of playback equipment.

The report uses current commercial vendor rates for various media and workflow scenarios to arrive at two average rates: $60 per item for high-volume processing, and $120 per item for specialized workflow. The report estimates that about 32{78247d6b22ac27135341102d75ec43dc193986201927d8d8e39f5e476ed6f5be} of the total preservation worthy media will require a specialized workflow. They caution against using the two price figures for anything other than nostalgia; because playback equipment is becoming harder to maintain and repair, the researchers think these rates are a historical low, and that prices will rise significantly long before the need is met.

We Can Barely Fund the Reports; Who Will Fund the Preservation?

After that paralyzing presentation, I searched around the conference for signs of hope and progress.

At the national level, the National Endowment for the Humanities is a popular fundraising target; planning grants are easy to apply for, while larger implementation grants require more work and are very competitive. The GRAMMY Foundation‘s commitment to funding preservation continues, and their two-step application process makes it easy for even a small organization to gauge their interest. The nonprofit Council on Library and Information Resources, with a historic commitment to document preservation, has made a some high profile grants in audio preservation and operates a robust grant program. Attendees at a pre-conference workshop gained practical advice from funders and from successful recipients.

Industry professionals offer some tools for the despairing collection guardian. We’ve come across a spreadsheet tool to estimate the value of lost media (the cost of inaction) over time.

More optimistically, we have also found tools from University of Indiana that help collections managers prioritize among their media holdings, MediaScore and MediaRivers.

Recognizing that most collections are in the same challenging situation, I tried to pick up ideas from other presentations about what any staff group could do—tasks well within their charters and capabilities—to whittle away at the problem, while awaiting that large, multi-year preservation fund.

Self-reliance in this context means marshaling the existing resources inside an institution – interns, student workers, and those who handle media for any purpose – to accomplish digital preservation as part of their own professional workflow. Tasks can include actual audio transfers. Or, groups can improve access to holdings by participating in a common cataloguing effort to better describe the recordings. Combined with a digitization-on-demand approach that makes it easy for scholars to obtain a digital copy of the analog recording of interest to them, these tasks can accomplish the transfer of some sought-after materials in a collection. Transfers can be done in-house or under a standing agreement with a willing vendor;  modest user fees can help cover digitization-on-demand.

At a practical level, an easy-to-grasp task is as simple as scouring online music retailers for digitized commercial versions of grooved media, buying the digital release and archiving it with the (untransferred) analog version, for just a dollar or ten instead of the $30-$80 it might cost to digitize the 45, 78 or LP.

Collaboration involves reaching out to colleagues and other institutions to compare holdings, avoiding digitizing duplicate items whenever possible, and sharing digital clones with any other holder of the analog item. Brewster Kahle and B. George of the Internet Archive presented an interesting approach that I’ll address in a future post.

Airshow’s Restoration Center is a suite of services for collections holders of all types, and specializes in digitization and restoration of historical music collections for both commercial and scholarly purposes.

Ann Blonston is in the Boulder studio. She keeps current on issues in the field of audio preservation. We welcome the opportunity to help develop funding proposals, in-house preservation capacity and customized metadata interfaces.