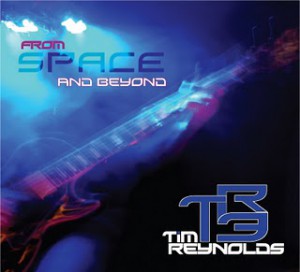 Tim Reynolds continued the tradition of sending his mixes to David Glasser at Airshow for mastering with his latest release.  “The best I could ever hope for,” is how Reynolds describes TR3’s first live double CD “From SPACE and Beyond,” released June 21, 2011. Culled from three TR3 performances in November 2009, FSAB has a classic, live rock album feel. The double CD has a mix of TR3 favorites, two new songs, “I Must be Going Insane” and “Belly of the Beast” which Reynolds first began playing acoustically, but quickly translated it into TR3’s electric repertoire, along with a few covers.