One of the musical highlights of my year (so far) was mastering the new Hot Tuna record Steady As She Goes – out now on CD, and coming soon on audiophile vinyl (2 LPs). This is Hot Tuna’s first studio recording in over 20 years, and their debut on Red House Records. Red House is primarily a folk-oriented label, and one of the best independent record labels out there. This album is certainly a departure for the label (rock on!), but familiar territory for Hot Tuna, who sound as tight and virtuosic as they did on their iconic Burgers LP. 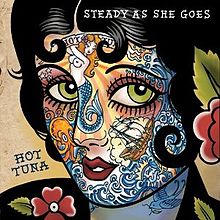 Jorma Kaukonen has one of the most distinctive guitar styles – on both electric and acoustic guitars, and Jack Casady is one of the most inventive bass players you will find anywhere. The project was recorded at Levon Helm’s studio in Woodstock, NY, produced by Larry Campbell (who adds some tasty licks to the recording) and engineered by Justin Guip. This CD follows Jorma’s 2009 solo project River of Time, also on Red House, which used the same production team.