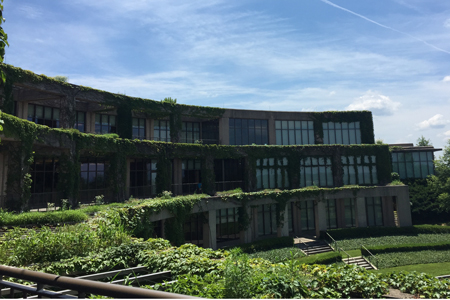 In PART ONE of her report, Anna overviews new approaches to sticky shed syndrome and optical transfer technology, and azimuth adjustment. among other topics.

Anna Frick and David Glasser attended the International AES Conference on Audio Archiving, Preservation & Restoration. The June event was held at the National Audiovisual Conservation Center in Culpeper VA, operated by the Library of Congress. The conference welcomed 170 participants from around the world, for three days of show and tell on one of our favorite topics, media archiving.

Here is Part One of Anna’s report:

June in Virginia is a great time to wear your puffy jacket… if you work at the Library of Congress National Audiovisual Conservation Center.
We had an all-access tour of the LOC NAVCC: From seeing the intake rooms for audio materials to chilling us down in the 39 degrees nitrate film vaults to my first glimpse of IRENE in person!

We were also able to see their audio preparation room and both the A1 and A2 production rooms where the LOC team of audio engineers assess and transfer precious audio archives from a wide array of collections.

No need to shed some particles: The promising research of using a single drop of water to determine whether you should bake that tape.
Andrew Davis of the Library of Congress discussed his chemical research into Sticky Shed Syndrome; he is developing a method of determining whether a tape has SSS by analyzing a drop of water on the surface of the tape. AES Paper here (available to AES members only): http://www.aes.org/e-lib/browse.cfm?elib=19590

Who is this IRENE, you ask? Developed by MacArthur Fellowship winning physicist Carl Haber and programmer Earl Cornell, IRENE is a system that uses high resolution imaging to “capture” the grooves from pieces like a cracked wax cylinder. It then uses software to convert the image to an audio file, making the otherwise-lost recording playable. Here’s more: http://www.berkeleyside.com/2013/12/16/carl-haber-get-just-one-idea-youre-feeling-pretty-good

I must AZIMUTH a serious question: a deep dive into the negative effects of incorrect azimuth adjustment.
Richard Hess demonstrated how improper azimuth adjustments can lead to complex comb filtering, phase shifting and improper stereo representation.

Could lathe drag have caused us to mishear our favorite records?
George Blood posed this question and I’m still pondering the repercussions of it. To illustrate, he played the first few notes of a classical piece recorded by various performers over many years and recording technologies and each one almost appeared to simply be played in a different key – but could instead have been a result of varying speed of the recording devices that then were not compensated for on the playback device. My head may explode thinking about that one.

Read more in Part Two of Anna’s report from Culpeper.