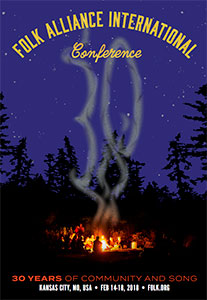 It’s almost impossible to sum up all that makes up Folk Alliance International. If you’ve been there before, you understand. It was my first year attending, and after years of hearing stories, I thought I was prepared. Folk Alliance is part family reunion, part party, part education, and an exploration of every nook and cranny that makes up the term “folk music.”

I hadn’t even made it past the lobby, suitcase in tow, before running into friends – new and old – catching up and feeling the beating heart of the community. And that was the pulse of the week: aim for one place, meet new friends, compare notes on what we’d seen and heard and what we were looking forward to, all while still moving. It was a hive of activity, to say the very least.

I was struck by the palpable mining of the roots of the music, both in performances and in the conversations around archival recordings. There is a conscious desire and effort to exploit and preserve the musical foundation of many cultures, while also cultivating the current music from all over the world. The new Global Summit on Archiving was one approach. Its goal was to connect archivists with those who seek out the collections, and to create a dialogue to solve issues like archive accessibility, use and provenance. An example is Jeremy Dutcher’s “Wolastaqiyik Lintuwakonawa”  project, where he had used recordings of his Canada First Nation ancestors to bring their songs back into the culture of his Wolastaq people, infusing them with his own contemporary visions for an album that is at once cultural touchpoint, song preserve, and beautiful bridge between past and future.

In that same vein I found Sam Lee’s Song Collectors’ Collective,  where Lee and his team are seeking out the Gypsies and Travellers of Britain, Ireland and beyond to preserve their rich history of storytelling through song. I caught up with Jayme Stone’s Folklife (the continuation of the project that began as the Lomax Project, mastered by David Glasser here at Airshow), a beautiful force that breathes new life into the songs found in field recordings, connecting us with the treasures and roots of folk music. I often get to mine archives that come through Airshow’s doors, preserving history through restoration efforts, and it was incredible to see what opportunities lie beyond just the digitization of old media when it becomes accessible to artists who revere the musical roots of our cultures.

Beyond these efforts at FAI ran the constant buzz of the music that filled the hallways of the hotel and conference center. I spent my evenings wandering the halls with my ears perked, ducking into showcases to listen in on the oasis of fresh sounds and familiar ones. In each room I found something different from the next, all with the same supportive community around them, all with the infectious spirit of FAI.

This video from Folk Alliance captures some of the spirit of the event. Hope to see you in Montreal!