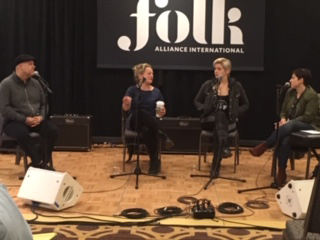 The studio tan is a real thing: we sometimes find it hard to leave our safe caves and venture out into the world. But every time we do, we’re reminded of why we love what we do. That was the case just a couple weeks ago when Anna and Ann ventured out of the wacky hotel world of Folk Alliance to visit two unique studios in New Orleans.

Rick Nelson (producer, multi-instrumentalist with Polyphonic Spree, Afghan Whigs), who owns Marigny Studios, took the morning to show us his studio, which was currently staged for a national touring band that was set to arrive in just a half an hour for their writing and recording session. The band had booked the studio for two weeks to settle in and get creative. Rick was kind enough to give us a brief look at everything before they arrived.

Over the years, the studio’s main live room had been a jazz joint, a punk club, and a church. The stage and the bar still remain. When we were there it was set up with instruments, rugs, couches, ambient lighting – an atmosphere designed to get your creative juices flowing. Emily Eck, who was on the Engineering Panel that Anna moderated at FAI and is one of the band’s engineers, told us the band would likely be working on the album for roughly a year, and this first burst of writing and arranging would propel the rest of the process.

Andrew Gilchrist (live sound engineer, lately with Maceo Parker) has built many studios over his career, but this one is where his full vision finally has come to fruition. He told us that he’d spent a lifetime learning how to do everything wrong so that when he got the opportunity, he could finally get it right.

After Katrina hit his neighborhood, he acquired the building that is now House of 1000 Hz and gradually collected scraps from the hurricane-ravaged city to repurpose in the studio. The result is a stunning playground of visual and sonic delights. It starts right as you walk in the door: there sits an organ on the floor where it should be, but over its head hangs another (gutted) organ that causes you to double-take. The floor is tiled in album cover art, the ceiling is lined with vinyl records, and the chandelier is made from a couple of drum kits. And this is just the live room. The control room had a skyline made from reclaimed wood from the neighborhood, and a 70s-eraTrident console (that was rebuilt by the guys at Grace Designs in Lyons CO). And in every nook and cranny you find a different instrument to play with: there’s a wall of children’s keyboards – including the little Casio one that Anna had as a child. There’s set of shelves with drum machines of every era with a monitor switcher so you can play with each one. Below deck there’s an apartment and kitchen for those long days and nights of creation (oh, and a plate reverb that’s routed up to the control room). Andrew and his studio are conducive to having the band record together in the live room, capturing the group energy as the foundation of the recording.

At both studios, we’re reminded about what makes studios work: In the end, it’s not the gear, but the sum of the parts, including – especially – the passionate professionals who run them.