Airshow HQ recently sat down with Anna Frick, engineer and Restoration Project Manager at our Boulder, CO studio, to talk about her experiences handling mastering, restoration, and everything in between. 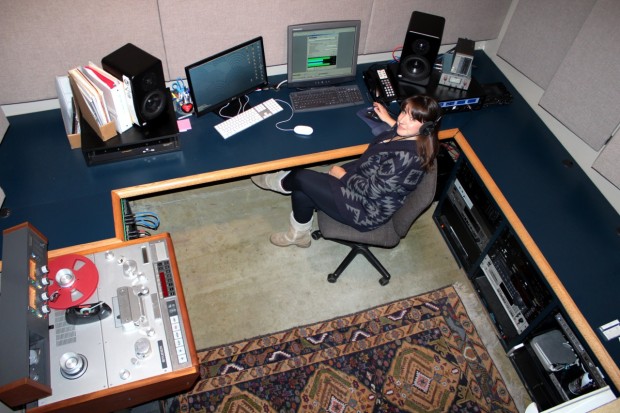 How did you get into engineering?

A friend of mine in high school was a songwriter and I got this hairbrained idea to record her songs so I could bring them with me to college. I’d never been in a studio before and had no idea what a producer’s role was or what we were doing, but our engineer was really supportive. He kind of looked at me one day and said “You know you can make a career out of this.” And that was it. I set my sights from there.

I went on to study at the University of Colorado at Denver, in their music business and production program. I worked several odd jobs until I got a job in the studio at an audiobook publishing company, honing my editing and listening skills. I met Dave Glasser and Ann Blonston through Planet Bluegrass and eventually was able to land the gig here at Airshow.

What drew you to mastering?

I feel really lucky and fortunate to be in the position I’m in at Airshow. I get to draw on the knowledge, expertise – and gear! – of all the guys here, especially Dave and Dom. They have really become great mentors to me. I get to listen to everything that the guys work on. Literally everything. It trains my ears, helps me understand the process more and more. And it’s a great conversation. So when I work on my own projects, I get feedback from the guys and the whole situation helps me grow as an engineer. From all of that knowledge, I’ve come to appreciate the art of mastering. It’s exciting and challenging, creative and technical, but it’s also nuanced. But ultimately, it’s about helping the music reach its potential in the marketplace.

So, you do more than mastering at Airshow.

Yeah, I do. I quality-check every master before it heads out the door. That’s a full listen to the audio, amongst other things. That’s one thing that I don’t think every mastering house has – someone who quality-checks everything before it goes to the manufacturer. Being able to do that here (instead of at the manufacturer stage) allows for a conversation between the engineer and the client that can prevent some serious headaches down the road.

I also have a somewhat masochistic propensity for handling and organizing large projects. So for these huge projects that we get – like The Rise and Fall of Paramount Records or the Grateful Dead projects or the transfer & restoration projects like Naropa – I keep everything straight. There are often hundreds or thousands of files in all different stages of the workflow and if we’re not meticulous about it, something gets lost. I won’t let that happen.

Tell us a bit about the The Rise and Fall of Paramount Records that you and Dave Glasser worked on.

That was such a cool project. Everyday, I got to work on these amazing gems. Some of them were in really rough shape. There’s a rumor that the record label cut some of the shellac used in the production of the original recordings with sawdust to cut down on the cost. It’s a wild story. But the music is incredible, just all of this foundational blues work – really just this fantastic history of the music. The record label would just pluck some of these pickers off their porches, ship ‘em up to Wisconsin, record a handful of tunes and send ‘em back home. And they’d record these heavy hitters like Ma Rainey or Charley Patton. All just to sell a few records in the hopes that those folks would buy a phonograph cabinet too.

Breathing new life into that history was amazing. But such a challenge too. Dave and I made a very conscious effort to restore the audio without detracting from the music itself. We didn’t want to over-process to the point that the music lost the essence of the performance. That was a challenging balance to achieve sometimes, but I’m certainly proud of the outcome. And the final package… wow. Over the top! It’s become one of my favorite things to do at home – I open up the Vol. 1 and Vol. 2 boxes and let people read, learn and marvel. Then I put on the music. Freaking awesome, in the truest sense of the word.

What about transfers and other restoration?

That’s been really cool. Not just the actual restoration, but the opportunity to work with these old or decaying audio formats and bring them back to life. That’s amazing. I’ve gotten to work with the special collections of various universities and organizations across the country like Colorado State University, Naropa University, Louisiana State University, and The Clyfford Still Museum to help preserve recordings and make them available to both their scholars and to the general public. It’s a treasure trove of history that not many people think about. These recordings are disappearing for various reasons – they may be actually decaying, or folks just may not know their worth, or may not have the resources to know what to do with them. I get the chance to prevent them from being lost forever. In my mind, not only is it just an awesome way to spend your day job, but it’s absolutely crucial to our future to preserve the past.… But it’s also just cool.

And it’s not just these big collections. Sometimes folks will bring in these pieces that they found in their attics or their grandparents’ houses or something. They have no idea what it is, or sometimes they do but they don’t have any way to listen to it. I get to help them discover that lost sound – like an old voice-o-graph that their grandfather recorded at the appliance store or something, suddenly he’s brought back to life almost. It’s so much fun, it really is.

What kinds of music do you listen to?

As anyone might say, I listen to all sorts of music. I grew up on folk music, somehow rolled into country music for a bit, I defaulted to rock and pop for a good while, I found jazz in college, I raged the indie rock scene in Denver. I’ve been all over the map, really, in terms of my interests.

But bluegrass has got to be up there, right?

Well yeah, of course it is. But if you had told me twenty years ago that I’d be listening to bluegrass music and spending my summers camping at bluegrass festivals, I might have threatened to throw myself off the nearest bridge. But here’s what happened: I found a home in the bluegrass scene. I fell in love with the scene before I fell in love with the music. That’s odd, right? But once I opened my ears up to that, suddenly all bets were off. It doesn’t mean I’m not checking out the Garth Brooks show in Denver (really excited about that one!), or that I would deny myself the opportunity to throw some horns at a Jack White show. I just said ‘throw some horns.’ Whoa. Live music is like breathing.

So, you’re a music lover.

I’m an enthusiast. And a “music helper”, I’d say. I recognized that I didn’t have any talent myself pretty early on, but I have an insane fascination with people who do. Songwriting, specifically, is something that just boggles my mind. But who knows, maybe someday.

You say you don’t have any talent, but I heard that you play the mandolin.

Well, sort of. I picked up the mandolin. That’s a very recent thing. I have no idea what I’m doing, but I’m having a damn good time doing it. It’s a weird thing to suddenly feel a part of that side of making sound. It’s a rabbit hole, for sure, and I’m loving every second of it. It’s brilliantly intimidating but I can’t help getting my feet wet.